The Dashing Divas raise funds for An Opera for Sunderland 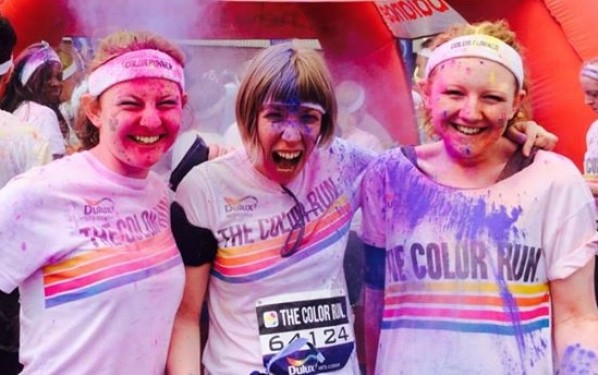 Dashing Divas Raise Funds for An Opera for Sunderland

In February 2014 eagle eyed Hannah Lindstedt spotted that the Color Run – a 5 kilometre, un-timed race in which thousands of participants are doused from head to toe in different colours at each kilometre – was coming to Sunderland

Hannah got straight on the phone to Louise (our Project Manager), asking if she could run to raise funds for Opera Sunderland. "Well of course" said Louise, "and I'll do it with you!"

The Dashing Divas were born!

On Sunday 20 July 2014 Louise, Hannah and Rachel Lindstedt took on the Color Run and raised £260 for Music in the Minster's next production 'An Opera for Sunderland'.

"This was a big challenge for me. I'm not a runner, unless you count running around back stage helping the cast get ready before a show! They say the Color Run is "The happiest 5k on the planet" – and I had a smile on my face at the end so it must be true!" - Louise

They money they raised will go directly towards our next production, An Opera for Sunderland, which will see the creation and performance of a new opera alongside digital storytelling, songwriting and singing workshops across Sunderland – all with a football theme!

Thank you to everyone who sponsored and supported us!