Reviews are in for The Soldier's Return 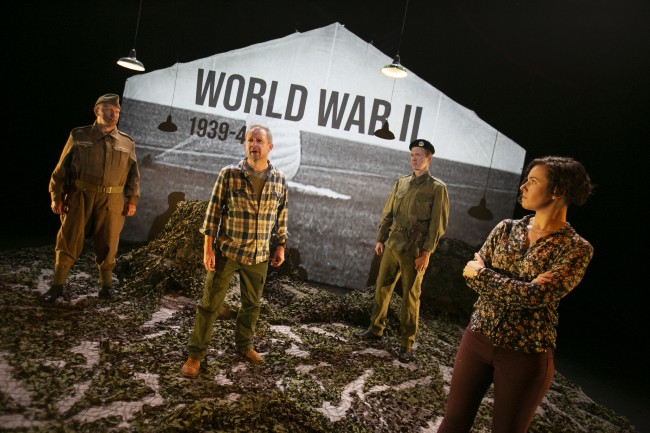 One year ago, a happy crowd of community performers gathered together in Sunderland’s Winter Gardens for a day of singing, drama and stepping forward to volunteer to join the chorus for the world premiere of our piece ‘The Soldier’s Return’. Things became complicated when lockdown came the following week, and the project went on to be changed from a live summer performance to a socially-distanced film, released on Remembrance Day 2020.

Life has been so tough for everyone through 2020 and into 2021. We have almost got used to uncertainty and doubt. Companies large and small have made, cancelled and changed plans – ourselves included. Under such circumstances, it’s easy to forget the good stuff, and to wonder, looking back, whether our achievements in 2020 had all been a dream... But I can confirm that 'The Soldier’s Return' was a resounding success, and not only in our own estimation. We’ve had a bit of a wait to get the last of the reviews in, but the headline overview is – everyone loved it!

The piece itself was praised particularly by Planet Hugill:
'Polley’s elegant libretto uses a variety of war situations... The way the interviews have been filleted and crafted into an opera libretto is impressive…’

The Reviews Hub said the Marcos’s music under Marco’s baton was:

Opera Magazine was struck by the work’s:

Our production and its transition from live performance to film also attracted praise from Opera Magazine, who noted the:

‘Annie Rigby’s direction is complex, detailed and always accurate and nuanced, making the performance of this new opera emotionally and, with her film and design collaborators, visually powerful.’

Making our film was challenging for everyone who sang in it, because of the lack of live feedback from support staff and audiences. In normal times, confidence grows on the back of the reactions of others, firstly in the rehearsal room, and then in the auditorium. But the determination and commitment of our chorus and principals resulted in some great reviews.

‘And in the background, another layer, the subtle, unseen presence of the Chorus, underscoring, emphasising, guiding our emotions almost, at times, subliminally.’

Planet Hugill singled out the:

‘...excellent community chorus...’ noting that ‘The most powerful moments came when the choir combines with Tenor Austin Gunn and the bass-baritone Andri Björn Róbertsson, the tormenting, ominous Voices in the head of The Man...’

Opera Magazine noted how the chorus:

‘...functions smoothly offstage as a Greek chorus, picking up phrases from the two principals and elaborating them, until at the height of The Man’s final nightmare it veers into snatches of ‘Abide with Me’.'

Our principals attracted accolades across the board. Austin Gunn and Andri Björn Róbertsson as Voices 1 and 2 were described as:

‘...(giving) powerful depth and background to what is happening on stage before our eyes’ – British Theatre Guide.

‘...despite being apparently disembodied figments of The Man’s imagination, play a big role in the opera’ - Planet Hugill.

‘...blend admirably as the shadowy figures’ - The Reviews Hub.

Katherine Aitken, as The Woman, was described by Opera Magazine as: ‘...superb...’,
while The British Theatre Guide notes that she:
‘...captures (the) complex of feelings beautifully...’.

Planet Hugill wrote:
‘Ian Priestley... gives a towering performance as the man, and the bulk of the opera is really built on his shoulders... Yet this is a sympathetic performance….’

The Reviews Hub felt:
‘Ian Priestley conveys the torment of The Man without melodramatic flourishes, trapped in memories, fears and routines…’ while his performance is described by VoxCarnyx as: ‘...a harrowing picture of torment...' and by Opera Magazine as: ‘...masterly as the returning warrior, using his baritone intelligently for a variety of moods.’

The British Theatre Guide summed up Ian’s performance as follows:
‘Playing a character as tortured as this, it would be easy for Priestley to overplay, to slip into the grand opera style, but he doesn’t. He feels it all; it’s there in his voice, gesture and body language but never even approaches that operatic caricature. It’s real and it’s heartfelt.’

Finally, I was delighted to see praise in the reviews for all of us together, from commission to performance. If opera is about one thing, it is the power of the team, and it was great to see this recognised.
Planet Hugill wrote:
‘As a film, the work has strong presence thanks to terrific work from all concerned at Opera Sunderland.''

The Reviews Hub wrote:
‘The Soldier’s Return is admirably conceived and executed as a community project, yet another example of boldness and ingenuity winning out over lockdown restrictions’.

VoxCarnyx wrote:
‘...but the most resonant details of the libretto come from the other community element – the verbatim testimony of veterans...’

‘Now 'The Soldier’s Return' is a 40-minute film using cinematic and pop video techniques whilst incorporating a real sense of theatre. I have to say that I cannot imagine it being done better in any other way and that is the finest compliment I can pay.’

‘The company needed to jump through endless hoops to bring about this fine film...’
and ended their review as follows:

Putting film and live performance together might have been a disaster but the coordination here is apparently seamless. It could have been achieved only by exceptional teamwork, allied to the company’s dauntless initiative under its artistic director Alison Barton – and first class use of funds from Arts Council England.’

I must say it’s gratifying to see that all our reviewers really seemed to get what our show was all about, and the courage and fortitude everyone brought to the project. I think we can all be proud of what we did there.

And yes. It happened. In the weirdest of all years. Well done us!